Jyvaskyla – Jarmo Sormunen’s church 4.30pm – combined band for worship was awesome and Jarmo S made an interview with me to flesh out our passion for worship. A super response from this thriving new church

Joensuu – Russian border – small band, powerful night in this remote town that loves visitors and is passionate about music. A staff member joined us on cello which was fab esoecially on ‘We in Christ are one’

When I was touring Finland in November 2013, we grabbed 2 days in Manku’s (Markus Vainiomaki) Helsinki studio. We had a ball recording 13 songs, including current live favourite song ‘I am yours'( based on the final days of Dietrich Bonhoeffer), an a bunch of new blues numbers. The band totally rocked. The most amazing 2 days recording I have ever known!

This our 15th album – it opens with Music in me’  a rocker I wrote at Marty Crowe’s batch, looking back on my 50 years, and how Jesus and the wonderful music and people in my life, have shaped who I am.

Can’t wait for you to hear the band an especially Teemu Viinikainen’s astounding blues and acoustic playing. Wait til you hear the stonking guitar on ‘What goes up’, ‘Relentless’ and ‘Somewhere, someone’ co-written by Anders Liljestrom. 10 of the songs are co-writes, Anders is such a great writer and luthier, with the other 3 songs that I bought to the table pretty much complete and road tested in Thames and Newmarket. Anders songs ‘Wonder why’ and ‘Bluebird’ are absolute tear jerkers!

Olli Helenius came as a one-off on drums and rocked! Wonder why – our song to remember Amanda Pouttu who lived for one day on earth, was incredibly special to sing on her birthday – 24 years on! Caught up with Juri Veikkola and family on holiday from Hong Kong and planned my April 2015 visit there

Friday evening English worship session in youth tent with 1000 young people – this was such a blast as I challenged the ‘Pente’s’ not to lose their roots in the Holy Spirit and passionate joyful worship! Israel Houghton followed on from us in the main tent that night!

Sture 21 pub Helsinki. It was a joy to rock out with Teemu just as he returned from playing in Aussie! One of those rare chances to play the whole album through and feel te power of the songs in spirit and music and message

Great to grab some time with Anders again to begin writing some new material. We have some more songs in the mode of the last 2 albums (blues etc) and some new worship oriented material on the boil. Please pray for the right direction ahead, especially as we meet up again in April 2015 and plan the way ahead. What a super partnership along with Manku in production.

Sure there have always been streams of the music industry that have been pushing the boundaries and that’s great but doesn’t it seem that everything has just been condensed down to love and hate?
It’s like we have taken the prized bull and boiled it up until all we have is an Oxo cube… do we really want beef stock rather than the bull itself?

To a point, we can expect that from the secular music industry… cliche after cliche, remix after remix of a song that used to be famous when people still used to play music and sing music as if it was a craft that was about connecting people rather than just making a quick buck… with the sole focus to make people famous.
I can understand that from the secular music industry… but when did our church music become so obvious and bland?

I’ve listened to Kiwi singer/songwriter and worship leader David Lyle Morris for a couple of years now… and the first thing that comes to my mind is ‘innocence’.
David has this amazing ability to craft songs that would have stood alongside the great artist such as Air Supply, James Taylor and Carole King.
His writing is honest, it’s heartfelt, it’s thoughtful and with the fear of sounding condescending I am tempted to use the word ‘sweet’.
In fact, the first time I saw him lead worship with just an acoustic guitar, I closed my eyes and I could almost imagine what it might have been like to worship with King David (if he played a guitar not a harp!)… there is a real authenticity that some people try to mimic but that you just can’t fake, and when you are around David Lyle Morris you just know that his heart is to help turn your eyes to God.

The album ‘Endlessly’ is a well-crafted album and the album starts with ‘Start of something new’ a song for his co-writer Anders Liljestrom’s boy Eino.
It’s a really honest song talking about the excitement and the forward-looking nature of a Dad excited to share in the first moments with his son and the legacy that the Father wants the son to take up… Lines like “This is the start of a family tree, you’re the little branch under me” show the simplicity of David and Andrers’ lyrics while at the same time casts great imagery.

I did an interview on Radio Rhema in NZ after the launch of our latest album Endlessly.

There are 6 songs featured from the album, stories behind the songs, news of our family and gigs etc
Three things, Endlessly, Desired haven, Caledonia Girl, I will be holding your hand, and Start of something new.

Unfortunately, the recording of this interview is no longer available.

Wanted to send you some thoughts on your new album.

I got a good chance to digest it over the last week or two while I was ensconced painting ceilings in our house as we renovate.

I love the opening track ‘Start of something new’- I definitely connect with it regarding my growing relationship with our wee Sam (just turned 2 last weekend!)

Caledonia girl is such a great track, the instrumentation sounds so full – such a classy sounding arrangement. Great vocal line too.

There are some really uplifting melodies throughout – songs that feel like you’ve known them for years and years, yet you’re only hearing them for the first time! Like ‘I will be holding your hand’ and ‘When love lies broken’ – there’s a timeless quality to them.

One thing that struck me was the ability of some songs, like ‘Desired Haven’, to create really strong images in my mind – the music seemed to conjure very vivid visuals for me – which I think has a lot to do with the arrangement and production, the soundscape you’ve created. ‘Open my eyes’ is similar really. Speaking of Open my eyes, the electric playing on this album is absolutely inspired. Really tasteful. Love the vocal only part of this song too – very brave to have nothing but your naked vocal there, but then it sounds great so what’s the risk!

‘Three things’ got me thinking about how the Blues tradition might actually help us recover the lost lament tradition – it lends itself to more heartfelt pleas, more confrontation – this song really opened this genre up to my imagination. I think there’s a lot of exploration to be done here.

‘Well of life’ is a real delight. It makes me happy to listen to it. You can hear your joy coming through so clearly. The title track ‘Endlessly’ is a bit like that too – the instrumentation seems to put a bounce in your step. It leaves me smiling.

As a whole, the album is such a great piece of art David. Congratulations mate – I hope you’re stoked.

Anyway, just wanted to send you some thoughts and reflections on the album 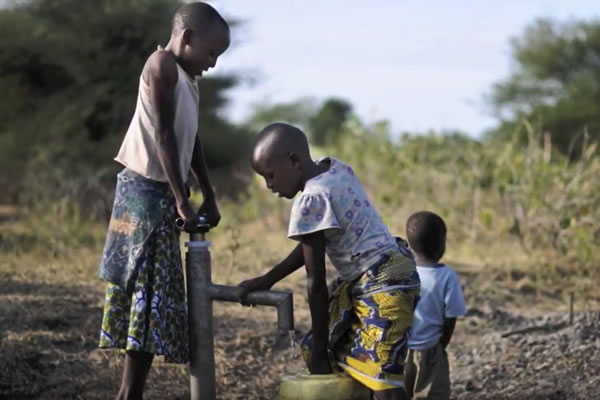 In a former life, I was heading towards being a Developing World Water Engineer! I had completed a Masters degree in Fiji, and nearly signed on to a Doctorate at Loughborough University to lead a project in Zanzibar, but my baptism in the UK and music passions took over.

Whenever I have been able to connect our music with this type of work, it has been a huge privilege and pleasure, eg touring with Tearfund and World Vision.

When sitting by a fountain with my great Finnish mate Jussi Miettinen at his home one European summer, we came up with the basic premise of ‘Well of life’, that we come to draw living water from Jesus, like the woman at the well in the Bible story, and we may be well when we drink deep.

Once we had cut the track on our Endlessly album featuring amazing playing from Teemu Viinikainen, again the legendary Nikki Denholm set her staggering photos to the track, both from her adventures in Africa and Asia.

Drink deep and be well!